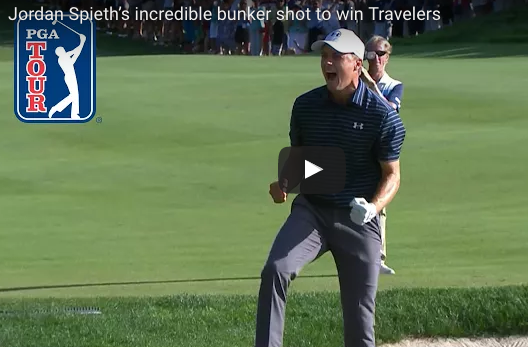 Bunker Rakes are a needed course accessory and… trophy?

Jordan Spieth Takes the 2017 Travelers Championship – And the Bunker Rake!

Early in their lessons, most golfers learn some basic rules of etiquette to help maintain a beautiful course. One such rule is that it’s important to rake following a bunker shot. Unfortunately, many golfers do not know the correct way to rake a bunker. These errors can leave the next golfer with the unenviable task of hitting his ball out of a divot or footprint left by another player. So let’s take a look at how to use a bunker rake, and what one caddy did after an incredible shot.

When entering the bunker, you’re permitted to bring the rake with you, but you are not allowed to use the rake prior to hitting your shot. Also, you must not use the rake as a cane to assist you when walking into the bunker. An opponent could think you’re using it to test the soil.

After you hit your ball out of the bunker, rake the area from which you played, as well as your own or any other footprints within reach.  If the divot and footprints are deep, use the flat back side of the rake to fill them in, and then use the tines on the front side of the rake to smooth out the area.  Finally, rake your footprints as you back out of the bunker, so when you leave the hazard, the entire area is clean.

What to do with the rake when you’re done using it? While the Rules of Golf don’t specify whether a rake should be left inside or outside of the bunker, the USGA recommends leaving the rake outside the hazard with the handle parallel to the line of play. Of course, if you’re Jordan Spieth and just made the shot of a lifetime, there is another alternative: have your caddy take the rake home as a souvenir.

Jordan Spieth’s playoff hole-out at the 2017 Travelers Championship was the stuff of legends—a bunker shot right into the hole to clinch the win. “For the bunker shot to go in, that was awesome. I don’t know if I’ll ever have a moment like that again,” said Spieth regarding his winning shot. The 10-time PGA tour winner celebrated his feat by throwing his club into the air. And just as if they had rehearsed it, his caddy, Michael Greller simultaneously launched the bunker rake.

Spieth will never forget that amazing shot. Apparently, neither will Greller. The caddy was seen with the rake an hour after the tournament ended, and was quoted as saying, “I’m taking it home.” A breach of etiquette? Maybe. But it was perhaps the first time a bunker rake was treated as a valuable trophy.

Of course, at Standard Golf, we’ve always held the bunker rake in high esteem. We’re a market leader with a long history of creating a complete line of quality golf accessories. So we’re glad to see this modest accessory finally enjoy its moment in the sun!

To learn more about bunker rakes by Standard Golf, visit us here!