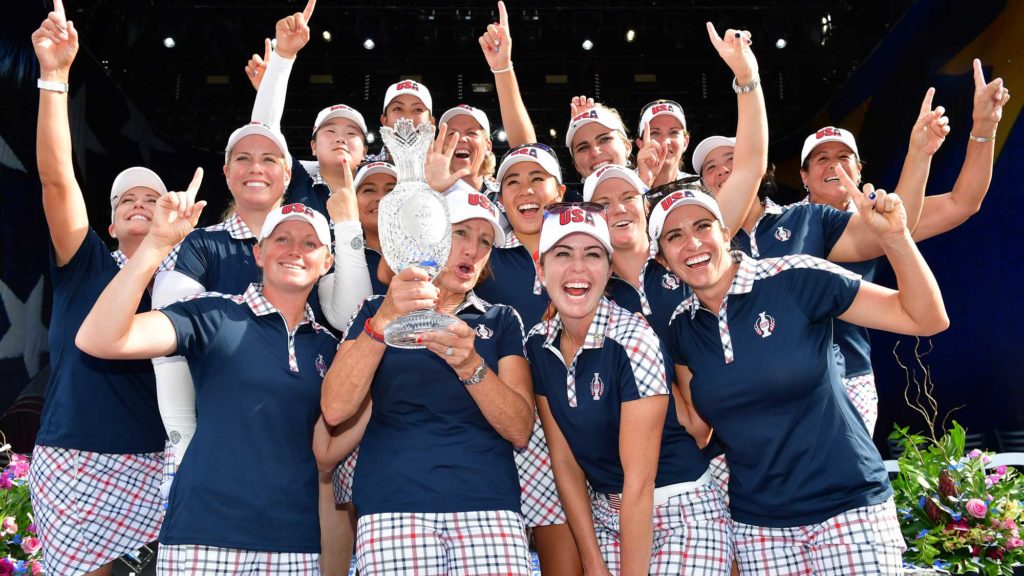 The Solheim Cup, held this past weekend in Iowa at the Des Moines Golf and Country Club, pitted the best female golfers in the United States against those from Europe in a festive yet friendly competition. This year, the United States won the Solheim Cup for the tenth time in 15 tries. While Europe made a strong start in Sunday singles play, the team slowly fell behind due, in part, to injuries.

This Solheim Cup had many great moments. Danielle Kang urged the crowd to clap and cheer while she was hitting on Friday, in the first shot she ever hit in the Solheim Cup. The enthusiasm and noise made the event festive and memorable, particularly with its strong community support and an overall vibe of appreciation and team spirit. Team USA player Angel Yin said the galleries were the largest she’d ever seen, inspiring her to hit farther than she ever had.

Rival captains Juli Inkster and Annika Sorenstam shimmied to “Dancing Queen” on the first tee the final day.[1] This was just one example of the spirit of good sportsmanship that dominated the weekend—the two teams followed the last matches to completion even after the Cup was determined. European star Suzann Pettersen had to drop out because of injury, putting her team at a disadvantage. Still, the future looks bright for Team Europe. The 2017 team had four young players – Georgia Hall, Emily Kristine Pedersen and Hull, who was already playing her third Solheim Cup, and Madelene Sagstrom – who will grow into hard-to-beat competitors.

We’d like to call attention, as well, to all the hard work Director of Grounds, Rick Tegtmeier and his team did over four years of renovations at the Des Moines Golf and Country Club. We’d also like to recognize all of the superintendents and their teams who volunteered for days, especially the efforts they put forth in the soaking rain early Sunday morning.

“As I sit and watch a welcome rain this morning I can’t help but be humbled by what happened here at DMGCC this past week,” wrote Rick in an email to the volunteers. “I am so proud to watch an amazing group of people come together and pull off one of Iowa’s biggest golf events Iowa has seen in the last 20 years.

“It was amazing to see you work together and take your amazing talents to come together and put out an amazing product,” Rick continued. “It didn’t matter where you were from, who you worked for or what your skill level was, everyone worked together to prove to the golf world that Iowa can do more than just grow corn. It was a truly an amazing event. We heard nothing but great accolades and praise. We had a few hiccups in the road but we all preserved and we put on one of the best Solheim Cup playing fields that the LPGA has played on.”

Standard Golf would like to celebrate the American victory and congratulate the Europeans on their strong effort. The leading golf accessories company was recently granted the ability to design and manufacture the pin flags for the Solheim Cup. The flags combine the look of both the American and European flags with the Solheim Cup as the centerpiece. With over a century as a respected manufacturer, Standard Golf has built up a reputation for quality products and quality people. We’ve supplied golf courses in countries all over the world, and have stocked courses for many LPGA and PGA tournaments.

To learn more, and see the products we currently offer, visit standardgolf.com!