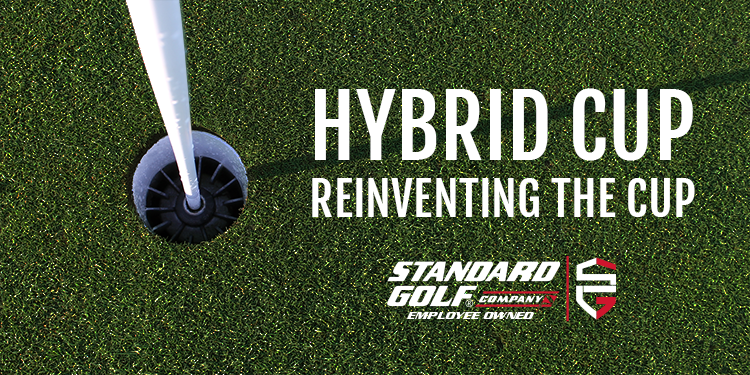 Build a car that runs without gas, they said. Genetically alter the corn for more yield, they said. Combine the best of a plastic cup and aluminum cup they asked – and we did!

The Merriam-Webster Dictionary has the following definitions for a Hybrid. The first is the noun, and the second an adjective.

“An offspring of two animals or plants of different races, breeds, varieties, or species.”

“Relating to or produced from parents of different species, varieties, or breeds.”

This explains our Hybrid Cup exactly.

The combination of two hole liners

As the R & A and USGA call “cups” hole liners it is best to be proper the week of The Open Championship. The Hybrid Cup is a combination of our metal (aluminum) based ST 2000 Cup and our best selling plastic Riji Cup (the plastic version of the ST 2000).

We all know golfers love the sound a ball makes when it hits the bottom of the cup. We also know that Superintendents do not like flaking cups or cups that are difficult to keep clean – especially at tournament time. This is how our Hybrid Cup fits together with golf.

“We wanted to design a cup that would give the golfer the satisfaction of hearing the “best sound in sports” unmuffled and the ease of cleanup and maintenance for the Superintendent.”

The Hybrid Cup starts with the aluminum bottom of the ST 2000 Cup. This cup was made popular as the bottom has the “smart fit” configuration when paired with a Standard Golf flagstick. The ferrule will sit down inside the cup and “lock” in place. This prevents the flagstick from twisting and turning which prevents premature wear on the bottom of the cup.

Second, the cup is over-molded in plastic. This gives the Hybrid Cup the look, fill and ease to clean of our plastic cup. A damp towel or cloth can clean up the inside of the Hybrid very quickly. With a chemical resistant polymer acting as the molding agent, these Hybrid Cups are built to last and endure.