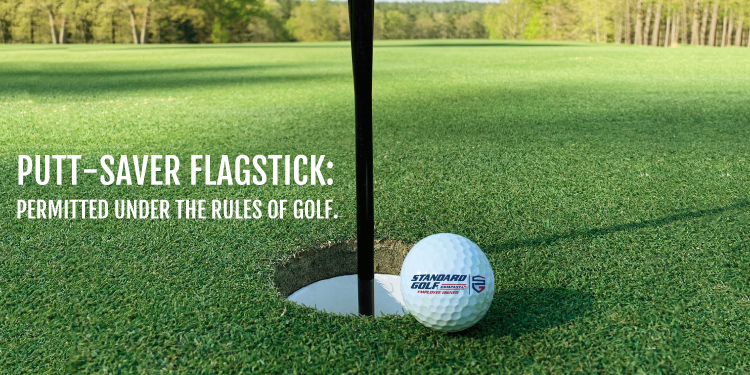 Putt-saver Tournament Flagstick, permitted under the Rules of Golf

In a ruling we at Standard Golf had anticipated, the new Putt-saver Tournament Flagstick does indeed “Meet the Requirements of the Rules of Golf.”

This is great news for many reasons, but mostly this demonstrates that Standard Golf continues to create new and innovative products for the golf course that are also in accordance with the official Rules of Golf. And of course that Standard Golf’s new Putt-saver Tournament Flagstick can be used from a leisure round to a competitive round and is permitted under the Rules of Golf.

As we are all aware, in 2019 the R&A and USGA updated the Rules of Golf in what they called a “modernization” of the rules. Many updates were included in this over-haul including the location to drop a ball (from your knees now vs. shoulder height). However the most interesting one to us, and one that could have a direct impact on the game, is that it is no longer a penalty to hit the flagstick while you are putting. In other words, you can keep the flagstick in the cup while putting.

“This Rule covers your choices for dealing with the flagstick. You may leave the flagstick in the hole or have it removed (which includes having someone attend the flagstick and remove it after your ball is played), but you must decide before making a stroke. There is normally no penalty if a ball in motion hits the flagstick.”

As you can see in the video below, we have two examples of the ball interacting with a cup and Putt-saver. The first half of the video shows the ball striking the putt-saver and dropping directly into the cup. The second half shows there is still room for the ball to fall into the cup without touching the flagstick.

These are both important in their own rights.

Bryson DeChambeau and others have voiced their opinions that they intend to leave the flagstick in the cup. Bryson famously mentioned the “Coefficient of Restitution”.

Additionally, with having less flagstick in the cup, the ball will have to travel further to miss falling into the cup after colliding with the flagstick. Thus giving the player a better chance to hole out.

Tiger Woods mentioned the optics and believe they can better see the cup with the flagstick is in the hole.

“Some of the putts where the hole is kind of visible, as it comes up over a rise, I can see it. But it would be nice to have a reference point, so I’ll probably leave it in for those kind of putts.

So if you believe colliding with the flagstick will help, or you want the optics and little interaction, the Putt-saver Tournament Flagstick is a great option for your golf course.