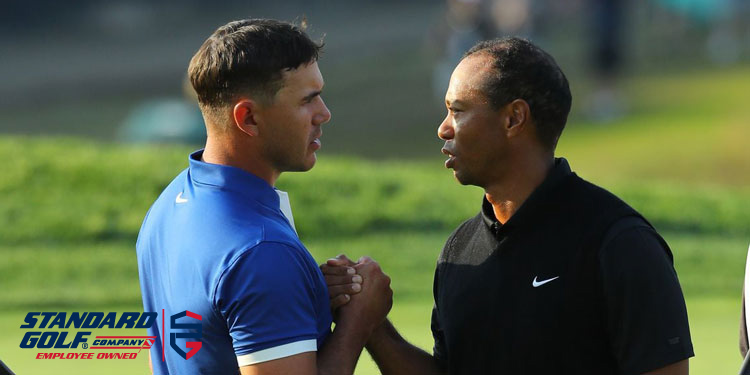 Brooks Koepka must have felt at home late Sunday afternoon at the famed Bethpage Black Golf Course. It was here that he claimed his 2nd straight PGA Championship and 4th Major title in his career.

At times Brooks made the course look easy, but on the final 9 holes he ran into a buzzsaw at 11, 12, 13, 14 with 4-straight bogeys. His bogey train allowed Dustin Johnson to get close, but as we now know it wasn’t close enough.

With his 4th Major championship in hand, it becomes easy to start comparing him to Tiger Woods. Is that fair? Tiger was so dominant for a full decade (well 12 years actually from 1997 – 2008) and Brooks hasn’t been on Tour for 10 years let. However a close look at the numbers and it certainly starts to look as if Brooks is beginning a run similar to Tiger’s.

To steal an another Nike Athlete’s tag line, instead of “Be like Mike” we are starting to see Brooks, “Be like Tiger.” It only makes sense.

Brooks Koepka, Jordan Speith, Rory McIlroy, Justin Thomson and many of the other young Tour stars grew up wanting to be like Tiger. They dreamt of being him, and beating him. Really, only Brooks has beaten Tiger.

Though Brooks’ run isn’t yet up to Tiger’s he is getting close. And if he continues on the streak he is on, well it could get there. Over the last 8 Majors Koepka has entered (he did not play in the 2018 Masters) he has won 4 of those tournaments.

Winning at 50% is great, not Tiger’s 83%, but better than anyone else not named Jack.

So, no, Brooks Koepka isn’t on Tigers level of winning – but that’s only because he hasn’t played enough as of yet. But I do feel that given the time, I think Koepka will win and have a successful long run ala Tiger.

When the U.S. Open heads to Pebble Beach next month, who is your favorite? Phil – he won there earlier this year, Tiger, Koepka (hottest player on tour in Majors) or the Field?